On July 13, I traveled to Beijing as the guest of the 19th Asia Pacific Band Directors Association (APBDA) Conference. My host was Li Fangfang, founder and conductor of the Beijing Wind Orchestra, the first independent professional wind ensemble in the Peoples’ Republic of China. The conference was a huge event, involving over 50 bands and ensembles from the various Asian nations. I was there as guest composer, and as one of the judges of the school band competition. My son Matthew traveled with, representing his publishing house, Maslanka Press, and as general photographer. Talking with Lin Chien-Kwan, Assoc. Prof. of Saxophone at Eastman School of Music.

We had a terrific time meeting and working with people from both East and West – conductors and judges from the United States, Korea, Singapore, Hong Kong, Australia, Taiwan, and Kazakhstan. The effort being made in China to develop technical and musical understanding in band performance is a beautiful thing to see. School band ensembles did not exist in China 30 years ago, but have now taken firm root through the tireless efforts of people such as Li Fangfang. Fangfang also led a powerful performance of Symphony No. 4 with the Beijing Wind Orchestra, a group he founded in order to bring the best of wind music to the Chinese people. The performance was part of the opening ceremony concert given in the impressively beautiful National Centre for the Performing Arts. The closing ceremony, at which I was honored for my contribution to the world of wind music, was a carefully-orchestrated extravaganza of celebratory music for band, choruses and soloists, marching bands, speeches, and awards – quite a show. Our gracious hosts spared no effort to see to our comfort and well-being, from first-class hotel accommodations to the real-deal Hua’s restaurant in downtown Beijing.

Finally, and most importantly, this conference was about our Chinese friends reaching out across national and political boundaries to ask our help in doing a very warm human thing – to build peace and harmony through the teaching and performing of music. Amazing and wonderful. Li Fangfang and the interpreter look on as David talks about Symphony No. 4. 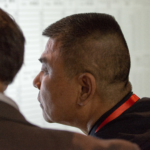 A TV spot from the closing ceremony: